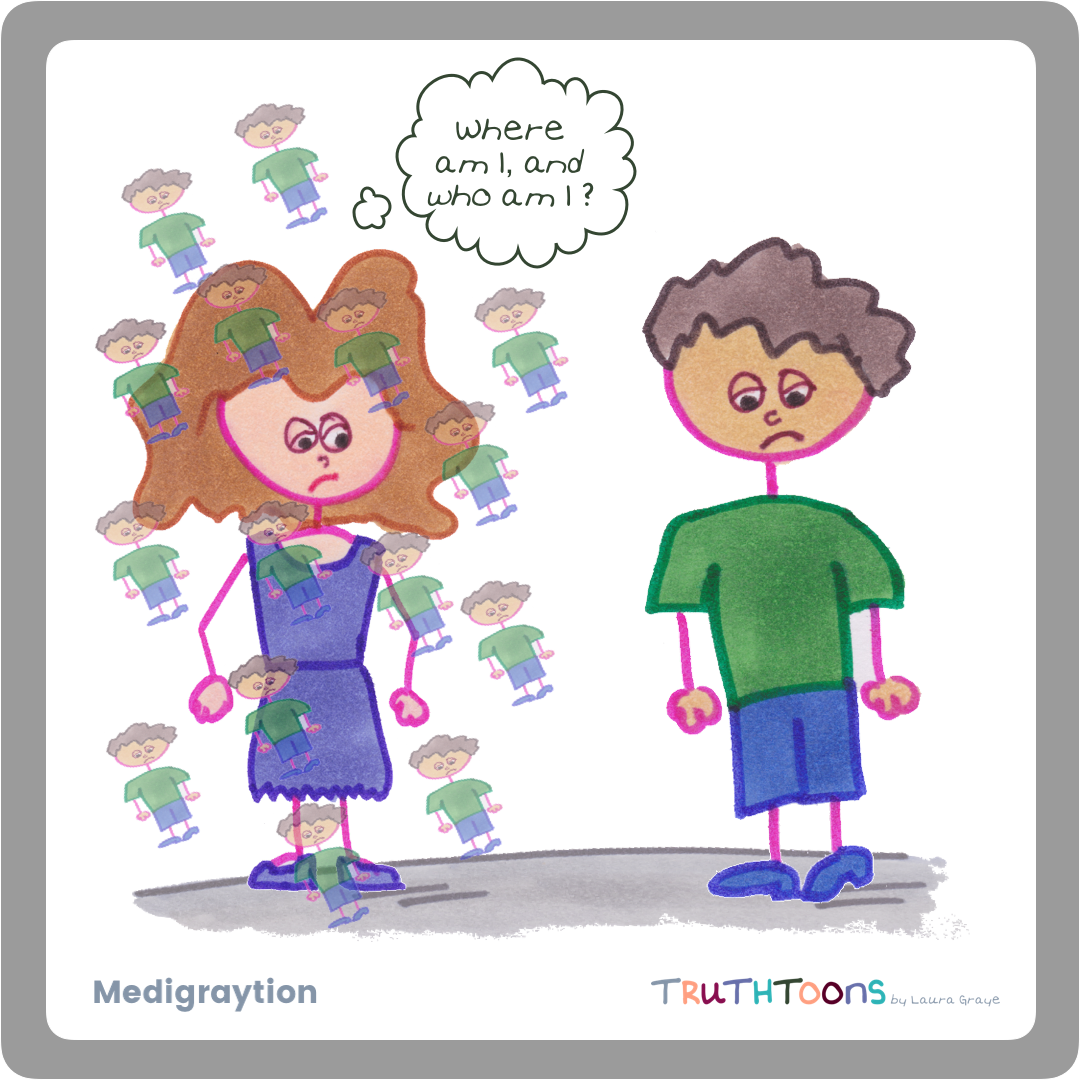 How Your Empathic Body is Betraying You.

Neural Reallocation is your choice…and your responsibility.

Humans have more than 100 billion neurons. Some neurons stay locked to their purpose. Other neurons, specifically a type of receptor neuron, called mirror neurons, are flexible enough that they can, and are, allocated to mirrorthe neural activity of other people.

How does this work?

Understood by neuroscience, our neurons receive information as electrial and chemical wavelength vibrations. What is less understood, yet certainly not less experienced -especially by Empaths- are the subtle energy vibrations our neurons are receiving and mirroring from our environment. Mirror neurons pick up the vibrations of other people and shape-shift themselves to create a mirror replication to inform the brain. This mirroring is not just a replication of the vibration of other’s emotions, but also their heart rate, their blood pressure, even their neurochemical composition.

“Hey, look at me!” said the mirror neuron to the brain, “I am making the same electrical and chemical charges John was just sending to his brain! He’s sending sad chemicals to his brain, now I am sending those too!”

Humans have this neural mirroring capability. Unfortunately, we also have the ability to allocate a greater percentage of neurons to mirroring than is healthy for any one individual. We can literally create a condition in our body where we have a higher percentage of neurons trained to reflect other people’s neural activity than the neurons reading our own bodies. That condition might be called overly-empathic.

Empaths who have allocated more of their receptor neurons to mirroring are like mini-medical-intuitives receiving information from other people’s systems and sending that information to be diagnosed by their own brain. The Empath’s brain — not their conscious mind — but the mechanical receiving/sending/translating organ inside the Empath’s skull is constantly receiving information about the organs, muscles, heart rate, blood pressure neurochemical activity, emotions, and thoughts of others. Trying to manage all this information and bring your own body into balance with this erroneous information is not healthy.

The misallocation of neurons:

As a generalization, more women than men are empathic. There are several recent studies showing women have close to 2x as many receptor neurons as men in just their face alone. (Scientific America: Women Feel More Pain ) However, if you are a highly empathic man, keep reading; your system likely works similarly. It is just as easy for a young boy to believe, consciously or unconsciously, that their security depended on being able to “mirror” the state of mind or emotional tenor of others in charge of their safety. And this is where allocation comes in.

The over-allocation of mirror neurons comes at a grave cost to the Empath’s own mental, emotional, and physical well-being. If you want to find the fastest way to pitch your body into anxiety, allocate a few billion extra neurons to interpreting the vibrational information of another human being. And, better yet, if you want to find yourself dealing with a list of physical conditions known to afflict Empaths (fibromyalgia, hypothyroidism, addison’s disease, neuropathy, chronic fatigue, sleep disorders) continue to silence your own neuronal diagnostic system until it reaches its brink, screaming at you through one of these diseases.

This over-allocation, more often than not, is directly correlated to the amount of fear, lack of security, lack of safety, and trauma one experiences as a child. Our childhood is when the majority of our billions and billions of neurons are trained and allocated.

What a vicious self-sabotaging cycle for the Empaths, most of whom were designed to be deeply sensitive, compassionate pioneers allocating their billions and billions of neurons to the collective evolution of love and self-expression. To then be twisted up and stuck in unconscious neural mirroring is heart-wrenching. On top of that, the wounded Empath is often energetically matched to a bully, a narcissist, or an energy vampire who wants nothing more than to have a few extra billion neurons helping them fill the hole of their own diminutive sense of self.

We can not blame the bully, the narcissist, nor the energy vampire for this neural theft. Without being overly empathetic, those people have their own sad struggles (not your responsibility Empath!). The truth is the wounded Empath has unconsciously offered this neural exchange to cover up their own deep fear and self-esteem issues.

Regardless, get the hell away from the bully, the narcissist, and the vampire as fast as you can. Their investment in the Empath is only their investment in how many of the Empath’s neurons they can bank to be mirrored for themselves and then to be withdrawn whenever they need a hit of false-confidence or energy. Extracting oneself from the neural hands of these characters will be difficult. The wounded Empath has allocated several billions of their own neurons to become a mirror of another person’s reality. Any good bully, narcissist or energy vampire will have tools galore to goad, bully or manipulate a weak (or is it a strong?) Empath into allocating even more of their neurons to mirror their agenda. This is especially true as the Empath begins to reallocate their neurons to reading their own body and emotions.

The wounded Empath’s loss of value:

With excessive neural mirroring, the wounded Empath has lost their own neural value. They have lost their own sense of personal vibration-who they are. The Empath’s mirror neurons create the Stockholm Syndrome of neural physicality. It is a red-tide coming in, where the vibrational waves of “other” takes over a large enough number of neural receptors that the Empath’s own internal self is lost. The Empath’s neural mirroring system is reprogramming their central nervous system, minute by minute. You become them. This can cause the wounded Empath to lose grounding in their own beliefs, their own feelings, their own values, themselves.

Sadly, especially for empathic women, offering up your own neurons is an incredibly valuable commodity in our society. Think of the value of our neurons! They are vibrational gold. Our neurons are the physical representation of our thoughts, our beliefs, our values, our feelings, our energy. And what is it that moves and shapes the human collective? The thoughts, opinions, beliefs, and emotions of the individuals that make up the collective.

When the wounded Empath unconsciously allows a greater percentage of their receptor neurons to mirror the vibration of another person’s thoughts, feelings, and energy, that other person has gained an enormous amount of extra human power to move the world in the direction they choose. The Empath has lost their vibrational vote. They have also knocked an already shaky sense-of-self by betraying themselves internally.

If you want to stay an empathic victim, stop reading here.

Most Empaths excessively mirror as an exchange for emotional or physical security which they were not able to reckon in themselves as children. The Empath who wants to heal this misallocation must take full responsibility for the misallocation. Regardless if the pattern was created from a terrible, unsafe, tragic childhood, it is the adult’s responsibility to re-allocate. This is the ultimate getting-out-of-victim neural vibration. Once the Empath takes responsibility for allotting too many neurons to attuning to others, they will need to move the mountain of mirror neurons back to their own system.

The Hero’s Journey of the Empath:

What happens then is pure magic. The Empath becomes incredibly attuned to themselves, their purpose, their hearts, their souls, their deepest compassion for self-expression and love. Like Michael Phelps who will never forget how to swim, the Empath will never lose their attuning skill. The attunement will now come from a place of power, not force. The attunment will be heart-centered, not fear-based. The Empath will transform from Empath (head-based) to the Compassionate Self (heart-based). This transformation is one of the most remarkable and magical experiences known to humankind. From there, the Empath-turned-Compassionate-Self can move out into the world safely bound to themselves, safely bound to their values, safely bound to their truth. This is the embodied hero’s journey of the Empath.

How does an empath shift to a new neurally internalized vibration? How does one escape from such a long-held faulty unconscious pattern? A pattern so deeply engrained. A pattern so steeped in our tribal ancestral self-preservation and external-self-worth. How can one move to a healthier neural devotion to self?

You must literally get back into your body. That is a must.

No more flight from your own body.

No more fusing to other.

You must fuse to yourself.

Find the long-lost wisdom and security of your heart, your gut, your bones, your skeleton on this earth.

I can not state this enough.

You must ground your neurons so deeply down into your bones that you will always know where you are, who you are.

From there, the trust, power, and love that will shine brilliantly from you will heal the world.