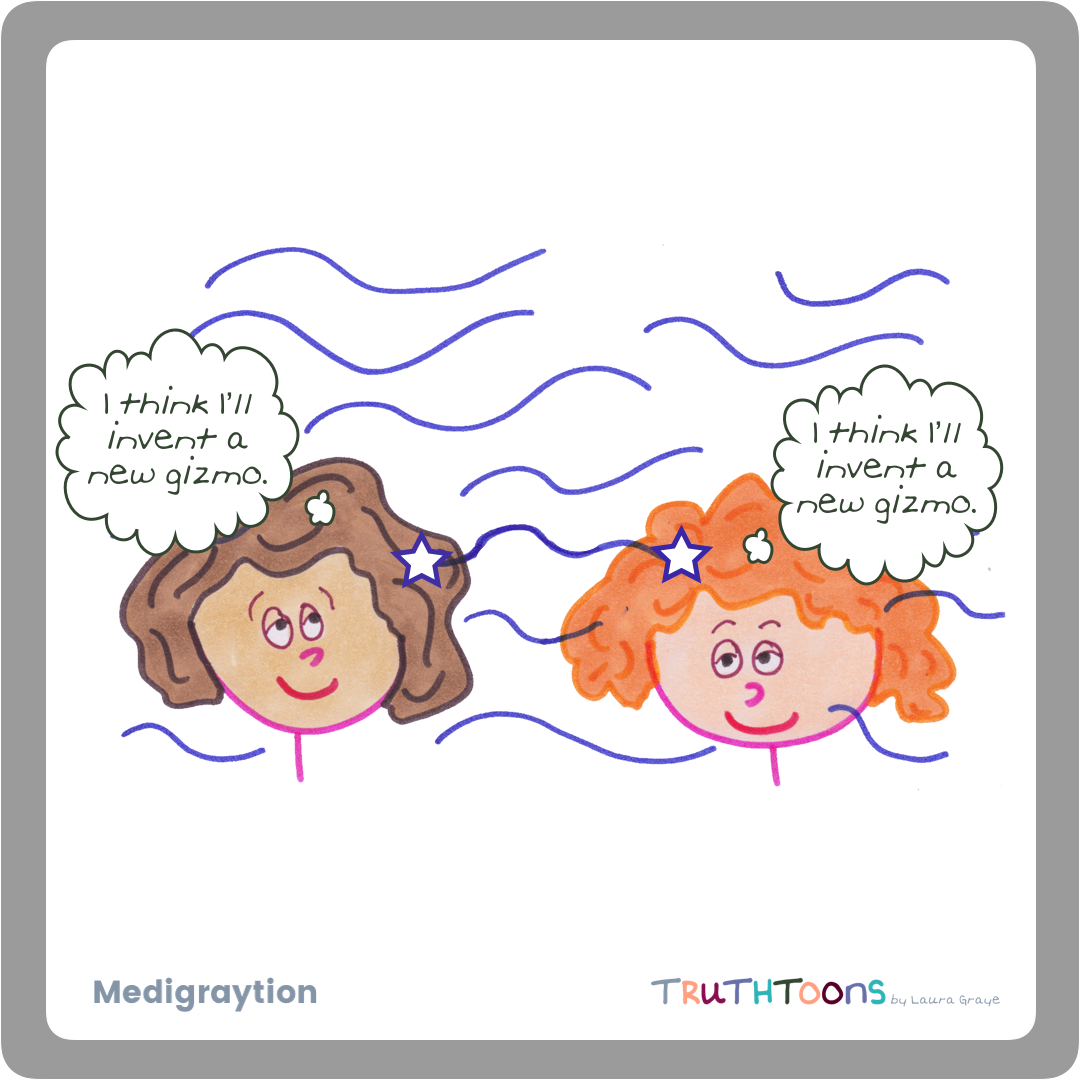 Elizabeth Gilbert, famous for her book, Eat, Love, Pray retells a phenomenal and true story of synchronicity in Consciousness.

A few years back, Elizabeth was at an authors luncheon. At her table were other well-known authors. The group was asking Elizabeth if she had an idea for her next book and, if she did, would she share it with them. Elizabeth began to tell the others at the table her vision for her next book-which she had not shared with anyone.

As she started to describe the theme and some of the characters, Elizabeth noticed another author at the table drop her jaw. She stopped speaking, and the other author finished Elizabeth’s sentence, describing the exact theme and the exact characters in the potential new book. Elizabeth’s eyes widened, and the two authors realized at that moment that neither of them had told anyone else about this new book idea. Somehow, both authors had connected through Consciousness to the same thought, the same vision, the same idea at the same time.

In April of 1986, Joe Dispensa, another well-known author, and a healer was seriously injured when he was hit by an SUV while running a triathlon. His choices, at 23 years old, were limited. Have surgery to avoid paralysis, or, as he writes in his books, he could choose to use what was coming through his mind, which was to use his consciousness and heal his vertebrae by giving that same consciousness “a plan, a template, a vision, and very specific orders.” Ten weeks later, without surgery, having used his consciousness to heal, Joe walked out of the hospital.

At the same time as Joe’s accident in April 1986, I was a freshman in college and found myself in the daily throes of terrible OCD episodes. These obsessive compulsive bouts had me looping for hours late at night, unable to talk myself into being sure I had locked the door of the yogurt shop I had just closed up. I’d lock it, walk away, think that I had not locked it, walk back, check the lock, walk away, beleive that my checking the lock had unlocked it, and then the loop would start all over again. Over and over and over again. Beginning at the 11:00 pm closing time this could go on until 1:00 am or 2:00 am in the morning.

Obviously, I needed help. I didn’t want to medicate myself. I didn’t want to tell my parents-I was too embarassed by the mental hostage crisis I was experiencing. My major was Biology, so I headed to the library and began to study the causes of OCD. While in the library, I had the very same thought Joe Dispenza was having that April in 1986; I could use my own consciousness to heal my OCD. I could give my consciousness a plan, a template, a vision, and very specific orders to heal my serotonin receptors.

How does shared consciousness happen?

These synchronistic experiences of shared consciouness happen all of the time. We often just don’t realize it unless we have the serendipity like Elizabeth Gilbert or we later hear or read, like I did, that the same thought-spark landed in someone else’s mind at the same time.

Consciousness spreads possibilities in energetic waves across a collective group, like the authors or healers in the examples above, through a resonance of manifestation.

Resonance of manifestation is a heady phrase to define the most natural vibrational flow to get something to materialize. Authors will resonate with the vibration of a new story; healers will resonate with a new healing modality. So, there is a sprinkling of these thought-sparks (waves of possibility) into these collective groups similar to how flowers spread their pollen, or like the 250 million sperm which make their way toward one egg. It is very much like nature to spread the chance of creative possibility over greater terrain to ensure the evolution of that possibility.

Consciousness is the sender of these waves of new information.

And, we are the receivers here to make meaning of these waves of information.

How do we receive this shared Consciousness?

More than one human may receive the same vibrational information from Consciousness. Somewhat like a loudspeaker…but a silent loudspeaker.

Consciousness is the sender of these waves of new information.

And, amazingly we are the receiver using the Consciousness within us to make meaning of these waves of information.

And, more than one of us can make the same meaning or very similar meaning from those waves of possibility.