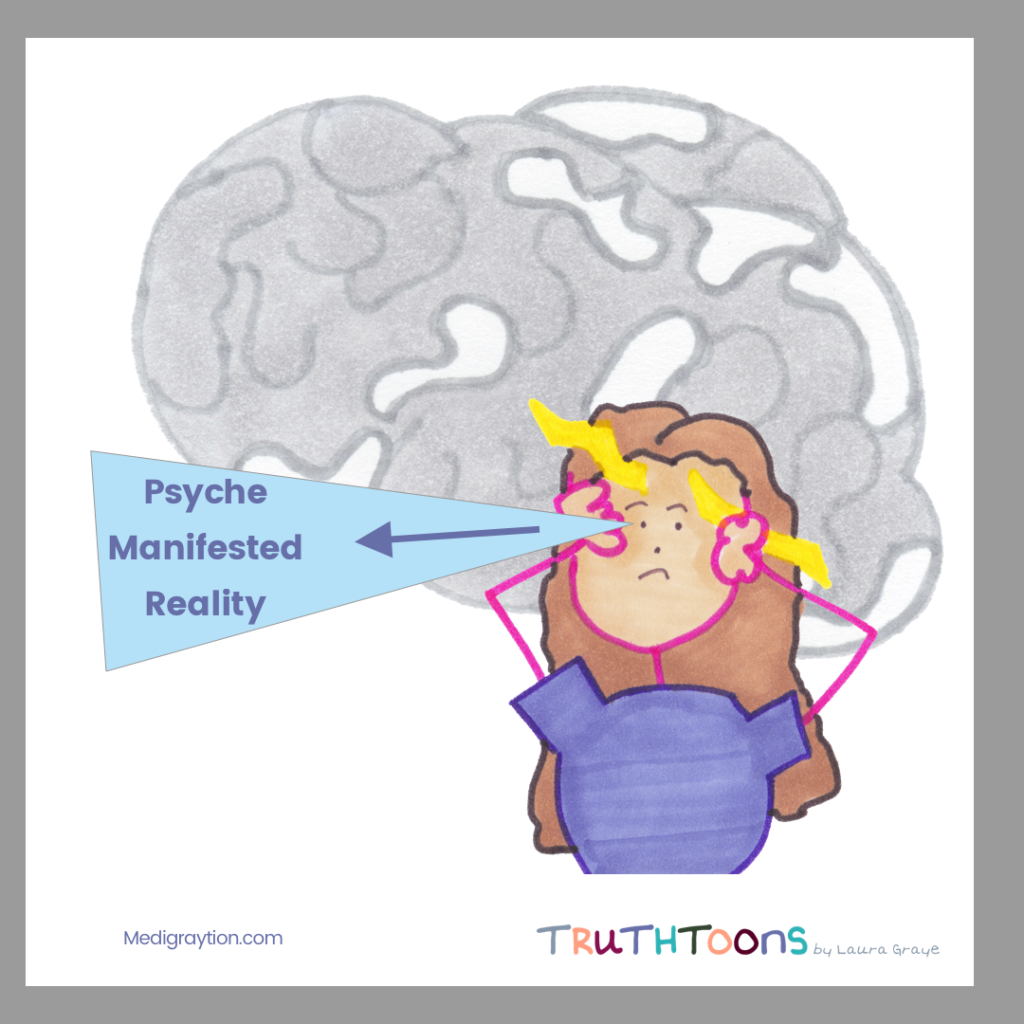 Your Psyche Is Manifesting Your Reality

There has been a surge of new research from the field of Neuropsychology which supports the theory that a lifetime of constructing past experiences in our unconscious mind plays an enormous role in our present-day experience of reality. This is known as the Psyche Manifested Reality.

What the studies are inferring is that 7.5 billion + people are walking around playing out reels of old movies which have been collecting in our brains and stored as electronic files. Yet, we think we are in present reality. To some, this could feel incredibly disempowering; thinking you are stuck in the horrors of your childhood Hulu repeats. But to others, this is a phenomenal grace of information to be handed to us by science. To imagine we are playing out old reels could be upsetting, yes. That is, however, until we understand the power of the EDIT tool. Then we are in business.

I’ll explain more about the physiological working of the Psyche Manifested Reality (PMR) in a later article but for right now, let’s get the basic concept down.

Great, there is proof these files are stored in our brains, but how are they creating our reality?

Remember, your brain is using these files mainly as an efficiency tool to save energy. So it bodes your mind well to preemptively know that when you walk outside, the grass is going to be green, the trees will look like trees and truth is, that is how they appear. And, unless you take hallucinogenic drugs (I am not suggesting this), the grass will continue to appear green. And pretty much everyone else’s brain is in agreement with the grass being green. Science has even proven grass is green due to the “reflection” of chlorophyll.

Example of How Your Reality is Created

I’ll give you an example from my own life. In my childhood, my mom had the tendency to throw me under the bus (we are great now, no worries). She did this mainly with my step-father and for a number of reasons. One, even when I was little, my mom sensed I had a deep emotional intelligence. I intuitively understood her fears and had great empathy toward her. I got that it was hard to deal with my step-father and so, I sort of allowed her to throw me under the bus. Two, my mom was more afraid of my step-father’s reaction than she was to my reaction. He was not a super conscious guy, so his reactions were typically blameful and not very introspective. My reactions, as I said, were more understanding. Therefore, I’d take the hit. Three, my mom didn’t like confrontation, whereas, even as a child, I was able to meet confrontation more head-on. So, scapegoating me was a lot easier for her than throwing herself in front of said-bus. And four, when I was younger, I would do anything, including taking one for the team, to be deeply connected to my mom, something she didn’t offer easily and something I needed desperately.

I grew a certain screwed-up value in being the Scapegoat. I was saving my mom from tough situations. That was true. But the value it created in me wasn’t my real value. That false-value grew in my unconscious and was reinforced over time. By the time I was eleven, I had a rainforest of Scapegoat electrical impulses running in my psyche. The reward for embedding this pattern into my dopamine network was the wink-and-nod from my mom as we silently acknowledge the annoyance of my stepfather and the emotional genius of me. Ahhh, connection with mommy.

As more time went by, not only would my brain be set up for the Scapegoat dynamic, it actually searched for it unconsciously so I could experience the delicious reward of connection. I was invaluable. Who doesn’t want a Scapegoat to blame your shame on? The problem was, the Scapegoaters I was meeting as an adult weren’t offering any kind of loving mommy connection. They just wanted to drop their pain-body of blame on me and walk away with no more consciousness then whence they arrived.

I could have dropped into victim, but I knew too much about the laws of energy and the Psyche Manifested Reality to kid myself. I had to take a look at why I would be creating this in my life, ad nauseam. What part of my unconscious was scapegoating myself?

I nailed it in about 5 minutes of in-depth inquiry….well, after 40 years of living it blindly. It was true. I had an unconscious part of myself which really did believe that whatever happened was my fault. It was always my fault. This part of me had been disintegrated from the rest of my consciousness to keep me “safe”. If I took the blame and really believed it, I could stay connected to my mom and the long line of conditional relationships which came after her. If I had not believed it wholeheartedly, I would have grown to hate my mom and would have lost my connection to her. Not safe as a child. Instead, I had to lose the connection to my true self.

How to shift your Psyche’s Manifested Reality

So how do you work to shift your Psyche Manifested Reality? It takes some time, but it is doable. Below you will find a PDF that you can either print out or just jot down the steps.

Use these questions to work through the exercise: